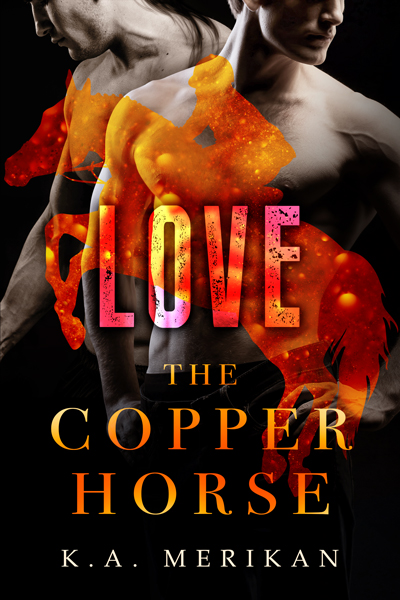 Just as Reuben finally settles into the role of Copper, his master’s proud stallion, his life gets turned upside down by a revolution that has been long brewing in London. But the men who come for Erik at his home bring much more than havoc. They uncover lies that Erik has fed Reuben, and the truth creates a rift between them that might be impossible to cross.

Even if Reuben still wanted to be Erik’s pony, is it possible for them to be together if his master loses all power and property? With no harness to hold him, no bit to stop him from speaking, can Reuben still be what Erik wants? Does he have anything to offer as a man?

The relationship they have established gets shaken to its core, and on the run from Erik’s enemies, they will both have to find out if the bond they share will survive, or if it will break.

Erik turned back to Reuben, and a frown marred his forehead, but the expression only made him more handsome. “That will not do at all. Do you have some gardening scissors, Alexander?” he asked, pulling on Reuben’s clothes, as if they were rags that somehow stuck to his skin.
Alexander chuckled and offered Erik a huge pair of scissors that could easily cut off a man’s prick. Or his nose.
Reuben blinked and took half a step back, but it still felt so much more comfortable to not speak. Then again, if he lost these clothes, what would he wear in case they needed to leave? Did it matter though? Was it his concern at all?
Reuben swallowed and put his jingling bag by the wall. He was so ready to become Copper again, and Coal’s gaze only added to the excitement of it all. They had never talked, and Coal had seemed unhappy to find out Reuben was a slave, but Reuben preferred it that way. He preferred seeing Coal as a big hot stallion than as a man who could understand the goings-on and judge him.
He closed his eyes, but when the cold steel rubbed against his bare stomach, he gave a low shriek. It was like a burn, only more like ice than fire.
“Shush, Copper. I’m not going to hurt you in any way,” said Erik, but that didn’t make the sound of two pieces of metal grinding together any less unpleasant.
“B-but, the clothes?” Reuben uttered, yet stayed in place. He didn’t know how he could still be Erik’s pony without the world of Erik’s home around them to provide him with structure, but maybe at Alexander’s, the make-believe could work?
“Don’t be silly. Horses don’t need to cover up. There’s nothing shameful about displaying all that lovely muscle, and your cock, and your big balls,” whispered Erik as the metal moved up Reuben’s neck to cut open his collar. Then the folds of fabric opened, and Reuben felt the cool air caressing his skin.
His breath was becoming shallow, yet he kept still, watching the fine clothes, which he could have never afforded in the past, fall off like layers of an onion. Erik talking about leaving him on display sent a tremor of excitement down his body already.
Erik’s eyes met his, so bright and yet so odd with their different colours. Reuben’s cock twitched the moment Erik cut through one of Reuben’s suspenders, and the trousers sagged on his hips.
Coal huffed in his stall, pacing behind the gate and thumping his feet against the floor.
“You like what you see, Coal?” Alexander approached the stall and petted Coal’s long hair. “The beautiful Copper has grown since we’ve last seen him, hasn’t he?”
The way Alexander watched him and the way Coal’s eyes followed every twitch of Reuben’s muscle made Reuben straighten up and lift his chin higher. The admiration tickled his self-worth, and now, in the presence of like-minded men, he was looking forward to shedding his humanity.
When the last of the clothes fell off and Erik poked Reuben’s shoe with his foot, it was a signal to removing the last of what made him a man.

This series just gets better and better. Dark dystopian zombie-verse with steampunk machinery and sexual delights of a darker nature?

When I first began reading the Copper Horse series (Book #1 Fear), even I had trouble adapting to the ruthless sexuality and blatant violence of Erik Dal, the Master to Reuben Wark's pony personality, Copper. As the series progresses, both Erik, aka Bluefinger, and Reuben, aka Copper, evolve and adapt. Their unique sexual relationship deepens, augmented by trust, and yes, love.

Here in the third installment, Erik is the one to sacrifice the most, and yet remain the same yet with more affection and concern for others' well-being, which will seem odd, as he kills more people in this book than any of the previous books!

We left off in the second book, Copper Horse: Pride, with the ominous sight of Hans' head rolling down the stairs after being brutally murdered. Hans was Erik's ever-dangerous bodyguard, and for him to be dead, things are indeed very bad! The Humanist Revolution has arrived, after being teased at for two books. Dima Gregorovich has assumed control of London and parts of Bylondon, stripping Erik Dal's wealth and power in vicious strokes. With Bluefinger's household destroyed, it's members scattered or dead, Erik and Reuben are left to fend for themselves, falling from one disaster to the next!

One thing about this book I really enjoyed was the use of Reuben's skills from his previous life in helping them survive zombie-infested forests and sewers. The threat of disease and death from zombies is a very real and distressing reality in this world, and I love the inclusion of the zombies as an obstacle the lovers need to defeat. This is a long book (yay!) and there's tons more the lovers are put through by the devious minds of the authors.

For me, one of the deeply appealing things about these books is the sexual aspect. Ponyplay is invigorating to read and charming, even while reading about fisting and caning. This book, while lighter on the sexual play due to the circumstances, showcases the affection and the devotion between Erik and Reuben. This book has more danger and more violence, but the real bond between Erik and Reuben shines brighter. Erik shows his feeling and desire to care for Reuben, and after a serious revelation that explains exactly how Reuben fell under Erik's regard, Reuben's submissive nature and true loyalty emerges and he finds strength in his love for his master.

The ending is rather abrupt, but I see tons of potential for a Book #4 in this series, with the same characters. (Even though it's labeled a trilogy.) I wasn't left feeling short-changed, just that there's more to tell about this couple and the world they're in.

I heartily recommend the first two full-length novels and the Short Story be read before reading The Copper Horse: Love. You won't be disappointed, as the entire series is well worth the time.

Previous books in the series:

Popular posts from this blog

Cia's Stories: The Solstice Prince by SJ Himes **Get This eBook Now!**

Earning His Trust by Alicia Nordwell Review and Giveaway!

Upcoming Release and Review Earning His Trust By Alicia Nordwell Title: Earning His Trust Author: Alicia Nordwell Publisher: Dreamspinner Press Release Date: Sept. 6th, 2017 Price: $4.99 Genre: Contemporary Length: 38,718 Blurb:  Evin lost the only two men he ever loved. But he might get a second chance with one of them—if he’s willing to take the risk.    Following the death of his husband, Evin is living in Portland and raising the infant son they had through a surrogate. Six-month-old Micah is his life, and if it means no time for activities or friendships beyond his minuscule support network, that’s a sacrifice Evin is willing to make. When he suffers a burn baking teething biscuits, the last person Evin expects to encounter in the ER is Ben, his lover from college—and the man who left him without a word of explanation.    Ben knows it won’t be easy to earn Evin’s trust and prove he’s not the same man Evin once knew, but he can’t bear
Read more